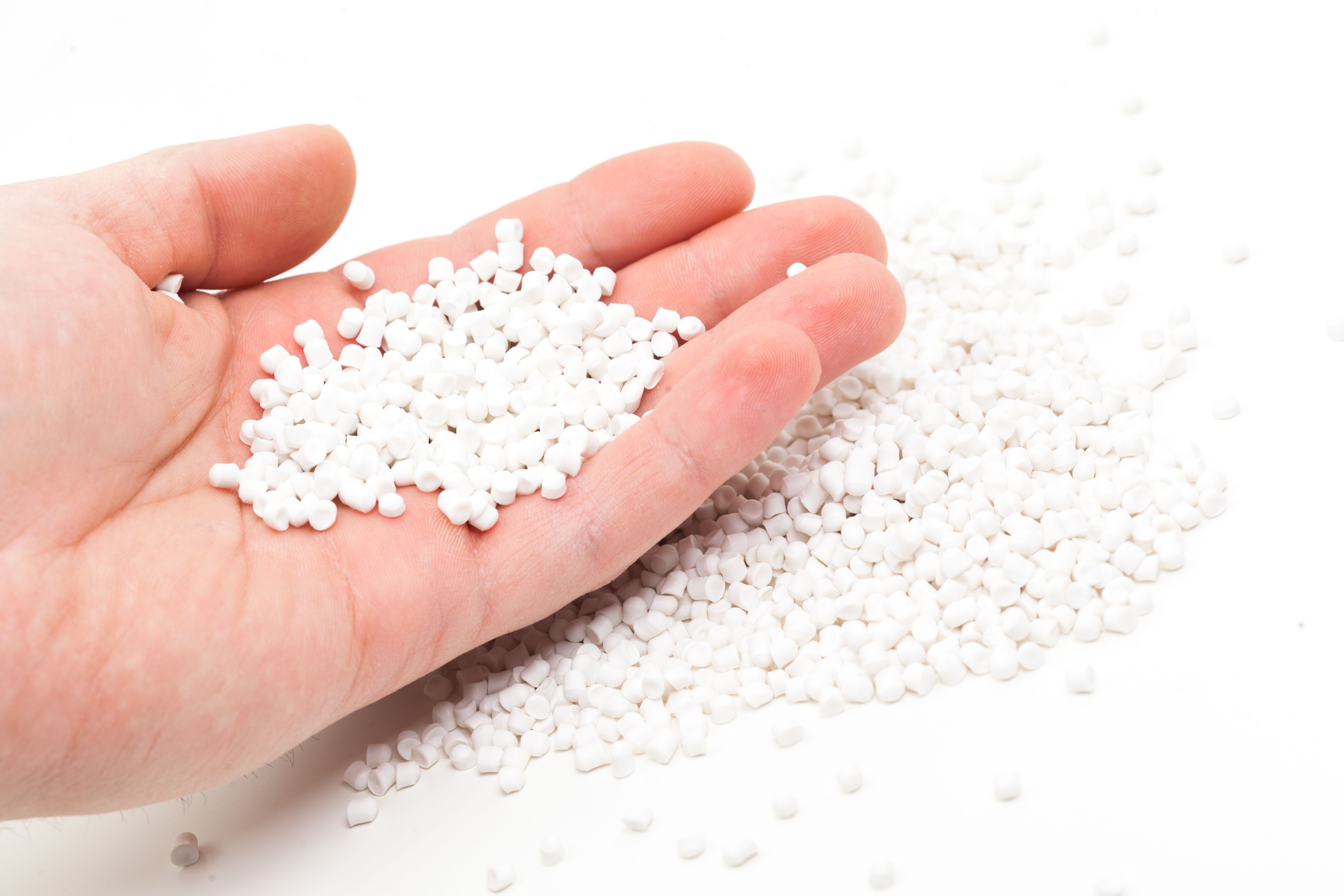 What is the best type of thermoplastic to use for your product design? You might be limited to your own personal knowledge so we’ve put together a quick hit list of the most typical types of thermoplastics that we feel can be a good starting point. Once you can identify the main type of thermoplastic from a general standpoint, you can reach out to your preferred resin supplier for further clarification from a costing standpoint and application fit.

Not all polymers are the same and each different type of polymer or co-polymer has specific characteristics that either could or couldn’t be of benefit to your application. Before you can go down the path fully designing a product, material selection should be first of mind, so you aren’t designing something that won’t be manufacturable.

Besides the basics of not having sharp corners and minimizing thick sections in a plastic part design, you have to be cognoscente not only about your application but also the material and how it will flow through your injection mold. What types of special equipment will be required and how complex will you tool design end up being?

If you go about designing with this type of mindset, you will have a far greater chance for minimal major changes once you bring this design to an injection molding company like Crescent Industries.

What are your application intentions?

Your company has a new product or is re-designing an existing one, now it’s time to put some 3D design to these ideas that have been tossed around in meetings. While some people may believe that regardless of what type of thermoplastic you use, the design isn’t affected until you get into the final stages, you will be losing efficiencies in the design process. There are significant design best practices to keep in mind when you’re using a commodity grade polypropylene vs an engineered grade glass filled nylon regardless if the fundamentals remain the same.

The starting point is to think about the application and look at 4 main areas:

Once you have come to a conclusion on the above you can start to narrow down your main thermoplastic families to determine which direction you should go down. Then researching the specific characteristics, mechanical properties, melt temp, chemical resistance, etc. will take you into the next sub category.

What is a Thermoplastic?

A thermoplastic is a plastic material, a polymer, that becomes pliable or moldable above a specific temperature and solidifies upon cooling.

Most thermoplastics have a high molecular weight. The polymer chains associate through intermolecular forces, which weaken rapidly with increased temperature, yielding a viscous liquid. Thus, thermoplastics may be reshaped by heating and are typically used to produce parts by various polymer processing techniques such as injection molding, compression molding and extrusion. Thermoplastics differ from thermosetting polymers, which form irreversible chemical bonds during the curing process. Thermosets do not melt when heated: they decompose and do not reform upon cooling.

Above its glass transition temperature and below its melting point, the physical properties of a thermoplastic change drastically without an associated phase change. Some thermoplastics do not fully crystallize below the glass transition temperature, retaining some or all of their amorphous characteristics. Amorphous and semi-amorphous plastics are used when high optical clarity is necessary, as light is scattered strongly by crystallites larger than its wavelength. Amorphous and semi-amorphous plastics are less resistant to chemical attack and environmental stress cracking because they lack a crystalline structure.

Brittleness can be decreased with the addition of plasticizers, which increases the mobility of amorphous chain segments to effectively lower the glass transition temperature. Modification of the polymer through copolymerization or through the addition of non-reactive side chains to monomers before polymerization can also lower it. Before these techniques were employed, plastic automobile parts would often crack when exposed to cold temperatures. These are linear or slightly branched long chain molecules capable of repeatedly softening on heating and hardening on cooling.

There are two main categories in the plastics industry when referring to thermoplastics, commodity and engineered grade. The commodity grade materials are the most common in light weight applications and typically things that will be thrown away over a short period of time or disposables. While some commodity grade materials can be robust under certain designs, applications and environments as a general rule of thumb this type is what your packaging and disposables are made from.

The engineered grades are more robust and have a vast range of different polymer blends, additives and advancements to produce the most robust performing material for difficult environments.

Below is a list of the most common Thermoplastics used today (credit: wikipedia.org):

Acrylic, a polymer called poly(methyl methacrylate) (PMMA), is also known by trade names such as Lucite, Perspex and Plexiglas. It serves as a sturdy substitute for glass for items such as aquariums, motorcycle helmet visors, aircraft windows, viewing ports of submersibles, and lenses of exterior lights of automobiles. It is extensively used to make signs, including lettering and logos. In medicine, it is used in bone cement and to replace eye lenses. Acrylic paint consists of PMMA particles suspended in water.

Acrylonitrile butadiene styrene (ABS) is a terpolymer synthesized from styrene and acrylonitrile in the presence of polybutadiene. ABS is a light-weight material that exhibits high impact resistance and mechanical toughness. It poses few risks to human health under normal handling. It is used in many consumer products, such as toys, appliances, and telephones.

Nylon belongs to a class of polymers called polyamides. It has served as a substitute mainly for hemp, cotton and silk, in products such as parachutes, cords, sails, flak vests and clothing. Nylon fibers are useful in making fabrics, rope, carpets and musical strings, whereas in bulk form, nylon is used for mechanical parts including machine screws, gears and power tool casings. In addition, it is used in the manufacture of heat-resistant composite materials.

Polylactic acid (polylactide) is a biodegradable thermoplastic aliphatic polyester derived from renewable resources, such as corn starch (in the United States), tapioca roots, chips or starch (mostly in Asia), or sugarcane. It is one of the materials used for 3D printing with fused deposition modeling (FDM) techniques.

Polybenzimidazole (PBI, short for Poly-[2,2’-(m-phenylen)-5,5’-bisbenzimidazole]) fiber is a synthetic fiber with a very high melting point. It has exceptional thermal and chemical stability and does not readily ignite. It was first discovered by American polymer chemist Carl Shipp Marvel in the pursuit of new materials with superior stability, retention of stiffness, toughness at elevated temperature. Due to its high stability, Polybenzimidazole is used to fabricate high-performance protective apparel such as firefighter's gear, astronaut space suits, high temperature protective gloves, welders’ apparel and aircraft wall fabrics. In recent years, polybenzimidazole found its application as membrane in fuel cells.

Polycarbonate (PC) thermoplastics are known under trademarks such as Lexan, Makrolon, Makroclear, and arcoPlus. They are easily worked, molded, and thermoformed for many applications, such as electronic components, construction materials, data storage devices, automotive and aircraft parts, check sockets in prosthetics, and security glazing. Polycarbonates do not have a unique resin identification code. Items made from polycarbonate can contain the precursor monomer bisphenol A (BPA).

Polyoxymethylene (POM), also known as acetal, polyacetal and polyformaldehyde, is an engineering thermoplastic used in precision parts requiring high stiffness, low friction, and excellent dimensional stability. As with many other synthetic polymers, it is produced by different chemical firms with slightly different formulas and sold variously by such names as Delrin, Celcon, Ramtal, Duracon, Kepital and Hostaform.

Polyether ether ketone(PEEK) is a colourless organic thermoplastic polymer in the polyaryletherketone (PAEK) family, used in engineering applications. It was originally introduced by Victrex PLC, then ICI (Imperial Chemical Industries) in the early 1980s. It has attractive properties like good abrasion resistance, low flammability and emission of smoke and toxic gases.

Polyethylene (polyethene, polythene, PE) is a family of similar materials categorized according to their density and molecular structure. It is also known as poly and is obtained by the addition polymerization of ethylene. It may be of low density or High density depending upon the process used in its manufacturing. It is resistant to moisture and most of the chemicals. It is flexible at room temperature. (and low temperature) and can be heat sealed. Since it is an inexpensive plastic it is made in large amounts to cater demand. For example:

Ultra-high-molecular-weight polyethylene (UHMWPE) is tough and resistant to chemicals. It is used to manufacture moving machine parts, bearings, gears, artificial joints and some bulletproof vests.

Polyphenylene sulfide (PPS) obtained by the condensation polymerization of p-dichlorobenzene and sodium sulfide, has outstanding chemical resistance, good electrical properties, excellent flame retardance, low coefficient of friction and high transparency to microwave radiation. PPS is principally used in coating applications. This is done by spraying an aqueous slurry of PPS particles and heating to temperatures above 370 °C. Particular grades of PPS can be used in injection and compression molding at temperatures (300 to 370 °C) at which PPS particles soften and undergo apparent crosslinking. Principal applications of injection and compression molded PPS include cookware, bearings, and pump parts for service in various corrosive environments.

Polypropylene (PP) is useful for such diverse products as reusable plastic food containers, microwave- and dishwasher-safe plastic containers, diaper lining, sanitary pad lining and casing, ropes, carpets, plastic moldings, piping systems, car batteries, insulation for electrical cables and filters for gases and liquids. In medicine, it is used in hernia treatment and to make heat-resistant medical equipment. Polypropylene sheets are used for stationery folders and packaging and clear storage bins. Polypropylene is defined by the recyclable plastic number 5. Although relatively inert, it is vulnerable to ultraviolet radiation and can degrade considerably in direct sunlight. Polypropylene is not as impact-resistant as the polyethylenes (HDPE, LDPE). It is also somewhat permeable to highly volatile gases and liquids.

Polyvinyl chloride (PVC) is a tough, lightweight material that is resistant to acids and bases. Much of it is used by the construction industry, such as for vinyl siding, drainpipes, gutters and roofing sheets. It is also converted to flexible forms with the addition of plasticizers, thereby making it useful for items such as hoses, tubing, electrical insulation, coats, jackets and upholstery. Flexible PVC is also used in inflatable products, such as water beds and pool toys. PVC is also a common material in vinyl action figures, especially in countries such as Japan, where the material is used extensively in so-called Sofubi figures. As PVC bends easily and has a tendency to be bent during transit, a method to 'repair' this deformation is to heat the plastic until it becomes mobile, then 're-bend' the material into the correct position.

Polytetrafluoroethylene (PTFE) is a variety of fluoropolymers commercialized under the brand name: Teflon. PTFE belongs to the thermoplastics class of polymers and expresses similar to other fluoropolymers, such as PVDF.

While the list may seem overwhelming, it’s a starting point to give you a foundation of which direction to go into. By working with your current injection molding partner, they should be able to provide some good guidance into specific grades that they feel would be best suited for your application. Crescent Industries has an extremely knowledgeable internal team to assist with all of your design questions as they work through a project with you. When choosing specific grades, Crescent will bring in their preferred resin supplier to determine what the best match would be.

If you’re interested in learning more about how Crescent Industries can assist in the manufacturability of your injection molding project, check out the link below about part and mold design guidelines! 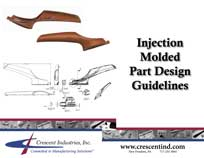